Here are the best South Indian movies in Hindi on Hotstar. 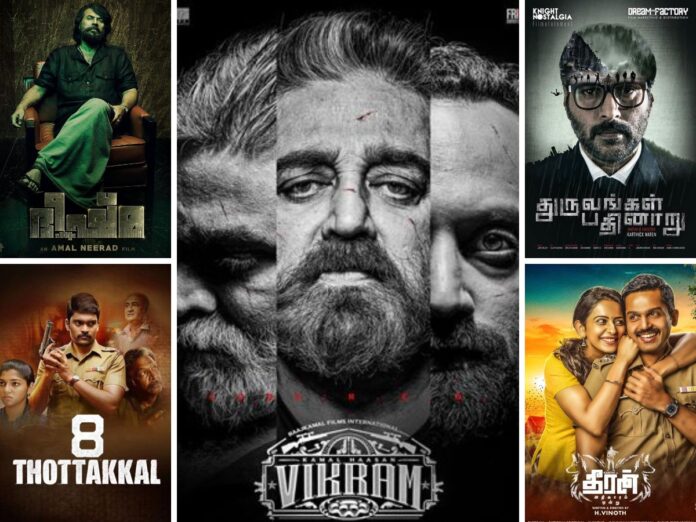 Some of the great benefits of subscribing to Disney Hotstar are the availability of Bollywood and Hollywood movies, original web series, and cricket matches. The content quality is high, making it a visually appealing option. If you’re interested in Hindi-dubbed South Indian movies, here are 10 of the best South Indian movies in Hindi available on Hotstar to watch in 2023.

The story begins with Afreen, who is the student president of Pakistan at a university in London. When her grandfather dies, she inherits a share of his property on the condition that she delivers a letter to Sita Mahalakshmi. Though she doesn’t want to do the job, she agrees to it to get her share of the inheritance. The letters are written by Ram to Sita.

Amar, a black squad commando, is given a case to solve. He sees that two other people were killed similarly by the masked gang and they were government officials. However, he is surprised to find that Karan was killed even though he was not connected to any government agencies. Amar’s inquiry leads him to find that Karan became an alcoholic, drug addict, and womanizer after the death of his son. However, he also had another side where he was cold towards his grandson who was suffering from a heart ailment. Amar comes across Santhanam, a drug lord while investigating a case. He realizes that Santhanam has the resources and connections to operate without fear. Meanwhile, the masked gang continues to kill government officials. Amar discovers who their next target is and, along with his team, sets out to save him from Sandhanam’s clutches. However, the masked gang overpowered them. Amar manages to chase their leader and discovers that he is known as Vikram.

#3 The Return of Abhimanyu

The Return of Abhimanyu is a highly anticipated action thriller that explores the very real dangers of hacking and data leaks. In our interconnected world, privacy is a valuable commodity that can be easily stolen from anyone. This film is a must-watch for anyone concerned about their digital safety.

This story is about a village in Andhra Pradesh that is being ravaged by a deadly disease. The village soothsayer predicts that a god will come to their rescue. Raju, a cab driver in Hyderabad, drives to Rajasthan to deliver an insurance check to the family of a man who died in his car. There, he meets a man from the village and learns about their problem. Raju realizes that he is the god the soothsayer predicted, and he takes it upon himself to save the village from evil.

The story revolves around three friends who accidentally kill someone with their car and manage to get away with it. Five years later, Deepak who was injured in the accident reminisces about the tragic night that included the accident, two murders, and a disappearance. Deepak is now a retired police officer, and he meets a young man who is interested in joining the IPS. The young guy asks about the case of a mystery killer in which Deepak lost his leg and his career. Thus, Deepak explains the mystery case. But in the end, the case is solved by the young man, and Deepak meets his ultimate end.

ACP Vetrimaran is a diligent police officer stationed in Chennai. While investigating a routine missing person case, he stumbles upon a major criminal operation involving several medical professionals. IPS Vetrimaran is a young and driven police officer posted as Assistant Commissioner of Police in Chennai. What begins as a simple missing person case quickly evolves into a double homicide. The investigation leads him to meet his future wife, but the case only becomes more complicated as time marches on. Eventually, his own family becomes involved in the mess and he is racing against the clock to solve the mystery.

Michael is a former gangster who has left his life of crime behind to become a marine exporter. When he starts receiving death threats, he is forced to confront his past. Michael comes from a long line of gangsters and is revered by many for his power and influence. However, some of the younger members of his family find his control over their lives too much to handle. They join forces with his enemies in an attempt to take him down.

As a crusader for the struggling engineers, Raghuvaran faces off against the powerful and arrogant owner of a construction company, Vasundhara Parameswaran. They engage in a war to win the corporate contarct. Raghuvaran is cool-headed and determined to fight for what’s right, while Vasundhara is ruthless and will stop at nothing to get what she wants. Who will come out on top?

Karthi stars as Theeran, a character inspired by Jangid, in the film. He is joined by Rakul Preet Singh and Abhimanyu Singh, who plays the main antagonist. Theeran is a police officer who is tasked with solving the mystery behind a series of murders. The only clue left behind is that all murders follow the same pattern.

An edge-of-your-seat thriller about two people on opposite sides of the law. Sathya, an honest man, accidentally loses his service pistol, which is loaded with eight bullets. Before he can retrieve it, the gun makes its way onto the black market and is sold to a man named Moorthy, who uses it for a bank robbery. As Sathya desperately searches for his pistol, a series of murders occur, committed with the same gun. Each bullet in the gun seems to take a life as Moorthy is forced to kill everyone involved in his crime.

Movies and shows on various OTT platforms such as Netflix, Amazon Prime Video, Hotstar, ZEE5 and more have...
Offers

Watching international movies opens up new horizons of entertainment and also introduces a viewer to a different and...
Talent

Deepika Padukone is one of the top actresses in Bollywood, and she is probably the most sought-after Indian...
Offers

Are you ready to be on the edge of your seat? Look no further than our list of...