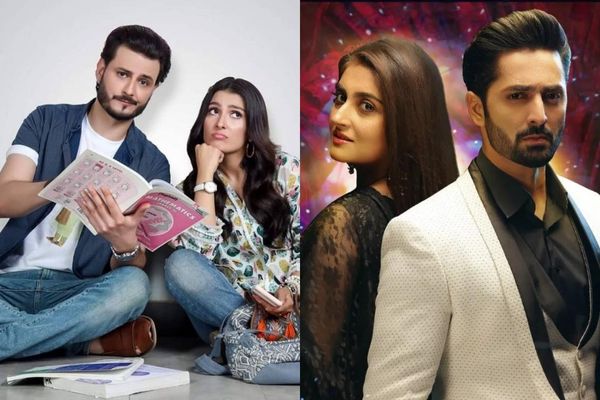 Are the traditional Indian TV dramas and the so-called modernised Hollywood and Korean Dramas not matching your taste anymore? Isn’t this the perfect opportunity to explore the best Pakistani dramas to binge-watch in 2022? Those who love and appreciate art from every culture would surely adore the top Pakistani shows streaming online right now.

We can guarantee that the best Pakistani web series will give you a new outlook on your conception of romantic, comedy and other genres of television. The best thing about Pakistani dramas is that they are easily available on a few select OTT services like Netflix, MX Player, and more, so you don’t have to search like a maniac for them.

Here are the 10 Most Famous and Best Pakistani Dramas involving captivating stories of love, romance, thrill and more to binge-watch:

This is one of the top Pakistani romantic comedy series to watch on the OTT platform ZEE5. The show follows a man who is searching for a woman who loves reading books. However, he gets entangled with a girl who is the exact opposite of the woman he wants in his life. This is one of the best Pakistani dramas to watch if you love a good dose of comedy and romance.

This is one of the most searched Pakistani shows on Google. It follows several characters who face different trials and tribulations to achieve their end goal. You will get connected to the characters through their journey. This heartwarming romantic comedy Pakistani drama is now streaming on Hum TV.

Mere Humsafar is a Pakistani drama that has gained immense popularity in India, Nepal and Bangladesh. The Pakistani show traces the journey of a girl who is mistreated by her aunt. However, when her cousin returns from the foreign, he marries her and gives her the respect she deserves. It is one of the best romantic Pakistani dramas to stream on ARY Digital HD.

This romantic Pakistani drama has become hugely famous all over the world due to its relatable premise. The show follows a cunning woman who marries a rich and wealthy man to enjoy a lavish life. However, after the marriage, she realises that the elder brother of her husband is her first love. One of the most complicated yet beloved romantic Pakistani dramas to watch on Geo Entertainment.

Dil Lagi is a Pakistani love story drama serial that you can watch right now on ARY Digital HD. The show follows a man who is hired by a woman to evict a family from their home. However, the man starts to grow closer to a girl of the family he is supposed to remove from the home. This is one of the best romantic Pakistani dramas to stream in 2022. Moreover, the series has only 25 episodes which means you don’t have to spend a lot of time to get done with it.

This period Pakistani drama serial has culminated and left behind a legacy that’s hard to match. When it was on-air, it was one of the most famous Pakistani shows. Aangan follows a Hindustani family that was left divided during the partition of India. One of the most poignant Pakistani dramas to watch on Hum TV.

You can watch this famous Pakistani romantic drama on the OTT platform MX Player in India. The show follows the complex dynamics between two lovers and their friends and family. It’s a relatable romantic drama that you will fall in love with. This is our personal favourite on this list of best Pakistani dramas to binge-watch.

Another romantic Pakistani drama that we rate quite highly is Deewangi which is now available to stream on Geo Entertainment. The Pakistani show follows a woman who somehow tries to make ends meet by working as a bus hostess. However, everything starts to change when she falls in love with a man.

Ishqiya is a romantic Pakistani drama that’s available to binge-watch on the most popular OTT platform Netflix in India. The serial is claimed to be one of the best Pakistani dramas of all time. It follows a woman who marries a guy of her father’s choice due to her sense of duty. However, she comes to realise that love can be found in the most unexpected places.

This bridal Pakistani romantic drama has a serious tone that will give you quite a bit of knowledge about Pakistani culture without being too preachy. The show follows a couple who wants to get married. However, the father of the bride insists that the marriage takes place through a ritual called ‘watta satta’.

Previous article
Parineeti Chopra Slaying with her cuteness, check her best movies and songs of all times
Next article
Top 10 Upcoming Movies And Web Series To Stream On Netflix In September 2022
Virat Verma

What are some of the hottest and sexiest web series that you have seen with engaging plots and...
Entertainment