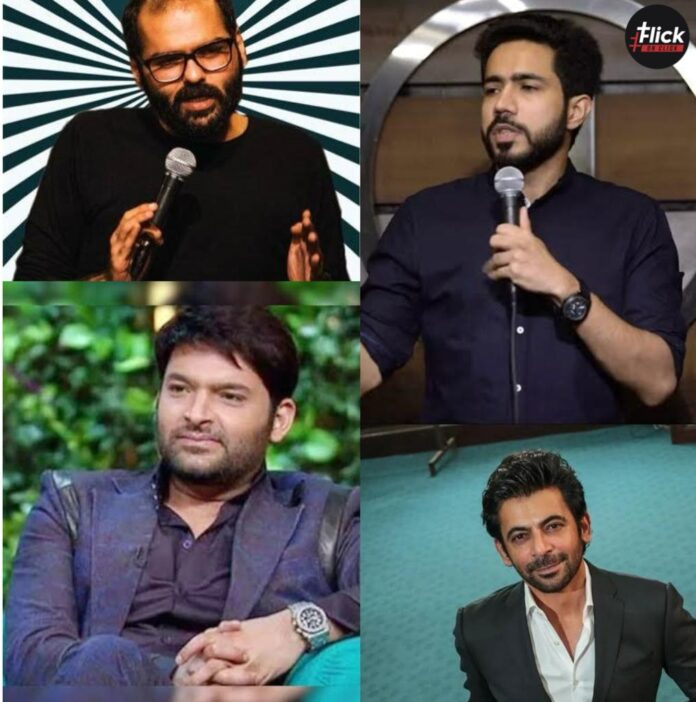 We cannot ignore the importance of comedy in our lives. We all need something to laugh about in order to have Joy, happiness and fun. Hence we, are all conscious that life is challenging and that the struggle continues. It is not a shower of roses, yet we must all do it. Work for a healthier life and look for ways to make your day-to-day life less depressing. It is critical to laugh every day to provide your brain with a cheerful movement. We present the top ten best comedians in India. Let us begin with Zakir Khan, India’s top comedian.

Zakir Khan is the top stand-up comedian in India and has over 5 million YouTube subscribers. In 2016, Zakir made a big impression on AIB Day. He is India’s biggest stand-up comedian. He is a writer who uses comedy to narrate the story of urban India.

Abhishek Upmanyu, one of the best Indian comedians, comes from Delhi and now lives in Mumbai. Because of his sense of humor and the way he tells jokes, he has risen to the ranks of India’s top comedians. With a biochemical engineering degree. His humor is largely about Indian comedians and academics. Breakups, respect for the aged, and discrimination in India are among his comic book subjects.

The Kapil Sharma Show and Comedy Nights with Kapil, which are the foundations of Kapil Sharma’s stardom, rely on Sunil Grover and the many personas he performs. Despite his good looks, he portrays ladies, old men, and a variety of other characters seriously. He’s one of those comics who takes their craft seriously. For example, when he left Comedy Nights with Kapil, a large portion of the public lost enthusiasm for the program.

Aditi Mittal, one of India’s greatest prominent female stand-up comedians, has participated in numerous comedy shows around the world. In 2013, she was selected by the BBC to attend the prestigious 100 Women Conference in London. She was also featured in the documentary Stand-Up Planet, which was filmed in the United States. Her jokes range from numerous cultural topics to women’s challenges in India. Her most popular internet performances were The Story of Madhumakkhi and Bra Shopping.

Atul Khatri a science student, and MBA by training worked as the CEO of his family’s computer business before turning to stand-up comedy as a sideline. He has been in several comedy shows and was a member of the comedic troupe East India Company. He also starred in several OTT programs and TV advertisements for well-known businesses.

Biswa Kalyan Rath, from the eastern region of Odisha, is one of Today’s top prominent stand-up comedians. His Movie Reviews alongside fellow comic Kanan Gill drew a lot of attention. With gigs in comic venues across the country and countless OTT shares, he recently become a popular face in Indian stand-up comedy communities.

Kunal Kamra, a guy who is often in the media and scandals these days, toiled as a production assistant in an advertising firm for several years before beginning his career as a comedian. Moreover, He has since been featured in various commercials and OTT shows. His comedy frequently challenges politicians and the administration, with some of his most well-known pieces including Patriotism & the Government and Revisiting Cash crunch.

Appurv Gupta, a qualified engineer, has performed at numerous college fests and corporate gatherings. His comedy is a lighthearted look at a middle-class Indian family and lifestyle, in which he embodies Gupta. Ji

He is one of the best comedians and authors from India. He has performed almost 250 events in various cities. The Times of India dubbed him one of the top Indian comedians. In a March 2012 IBN Live poll, he was rated #1 among the 30 most intriguing Twitter people in India.

Punjabi comedy movies are notorious for packing a lot of bombs, and this year has been no exception....
Entertainment

Live stand-up comedy shows have become one of the best ways to spend an evening laughing out with...
Entertainment

In the art of stand-up comedy, a comic performs both live and increasingly even digitally. There has been...
Entertainment

Punjabi comedy movies are notorious for packing a lot of bombs, and this year has been no exception....
Entertainment

Comedy Web Series in Hindi hits differently from comedy shows in English. We all know that listening to...